And I’m back! Well… I’m trying to get back to my BeachBody Challenge and my workout routine in general.  It’s been a couple weeks :-/  If you follow me on Twitter or Facebook, you know that I had a family emergency with a really scary close call with Ben in the hospital for 5 days. I am truly grateful to live in a time where modern medicine was able to save Ben’s life without having to cut him open.  He’s doing very well and already back to work :-)

The day he was rushed to the hospital in an ambulance was Day51 of my Beach Body Challenge and I was actually able to finish my workouts.  I went for an 8 mile bike ride in the morning. The boys wanted to go for a swim and Ben wanted to workout at the gym as soon as I got back. I couldn’t believe that the boys actually jumped into the pool. It was only 58 degrees out! In hind sight, Ben probably shouldn’t have worked out because he wound up throwing up when we got back home. The vomitting is what tore his stomach and it just happened to be right over an artery so he started to bleed out without knowing it until much later. 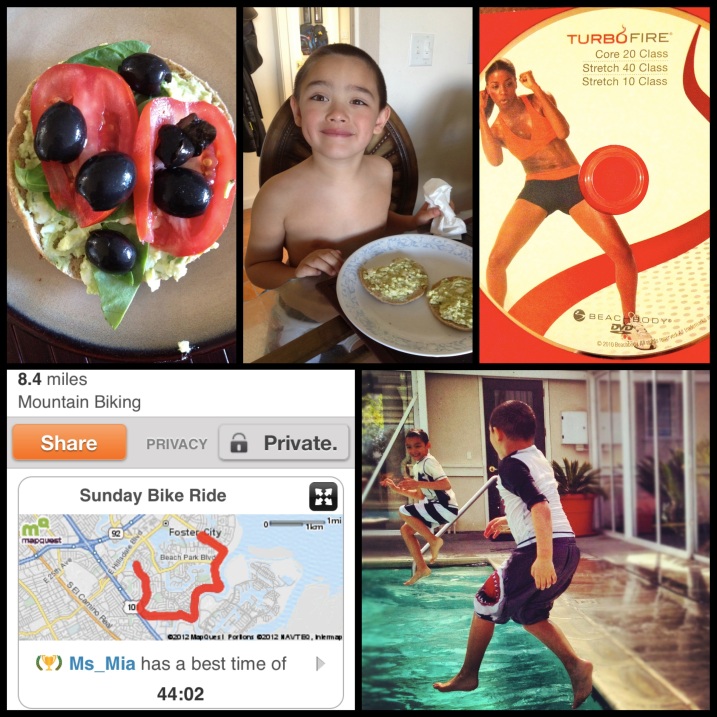 He got through most of his shift before he started to feel light headed and looking really pale.  He had gone to the bathroom throughout  the day but didn’t realize that he was bleeding out.  He decided to take the rest of the day off but went to bathroom one last time and that was when he started throwing up blood :-( This was when they called the ambulance and sent him to the hospital.  I got the call just as I was starting dinner for the boys.  My heart sank but I focused on doing what needed to be done. I got the boys ready and out the door. I immediately called his parents hoping that one of them would come.  I wasn’t sure how bad Ben was. I was worried how the boys were going to handle the ER.

Fortunately, the ER wasn’t busy or crazy at all. Ben was in a room and looked terrified.  The boys were ok until they tried to put a tube down Ben’s nose and throat.  It started a vomitting fit and he threw up so much blood.  This scared both of the boys and I knew that it was time to go. It broke my heart to leave. I didn’t want to leave Ben there all alone. He kept asking what was wrong with him. Seppe was in full tears and Gio was doing his best to be strong but I could see tears in his eyes. I promised Ben that I’d be back. I was grateful that Ruth called and said that she would come that night.  I took the boys home and made them a late dinner. I didn’t have an appetite at all. I had to wait 2 hours for Ruth to come from Sacramento.

Turbo Fire Day 49 – While I waited, I did the Core20 and Stretch40.  I needed to keep busy. I was trying not to freak out and cry in front of the boys. It was really hard, but doing the workouts helped, especially the Stretch40.  The yoga really helped with the stress and tension. I didn’t enjoy the relaxation part as much. It was hard to clear my mind. I was so worried and scared. At least I didn’t spend an hour just sitting there freaking out.

As soon as I was finished, I got dressed and waited another half hour before Ruth arrived and went back to the hospital as soon as she got here. I went back to the ER but they had already transferred him to ICU.  This, of course, added to my worry. I had to wait a half hour before they let me in to see him.  He as so weak and pale.  He was half asleep. I was allowed to spend the night and I did. It was a Long night.  Neither one of us slept that much.  Ben was restless but was not allowed to get up at all. I helped bring him his bed pan and anything else he needed in between the nurses coming in to help. They were great at being there for pretty much everything. Ben was not happy because he wasn’t allowed to eat or drink anything.  The enoscopy was scheduled for the morning and they needed his stomach to be as empty as possible.

Anytime Ben went to the bathroom he would also throw up blood. They were giving him blood to try and stay ahead of the blood loss. I think they didn’t realize how much he had already lost while at work and in the ER. They hoped that the procedure would help them find the cause of the bleed (they didn’t know yet) and stop it. The procedure in the morning didn’t help much.  It ruled out their first diagnosis of a stomach ulcer but there was so much blood that they weren’t able to see where it was coming from.  They decided to repeat the procedure in the afternoon with Ben completely sedated so they could suck out all the blood in area. It was a long 4 hours in between the procedures. Ben wasn’t doing well at this point. We knew that if they couldn’t find the the source of bleeding with the second enoscopy that he would need surgery.

The second enoscopy took longer so I was worried that he had gone into surgery. I was relieved when the nurse told me that they found the source of the bleed and were able to stop it.  When they allowed me back into his room, he was still sleeping but I could already see the color coming back to his skin.  I hadn’t noticed how pale he really was until I saw him with some color.  A couple hours later he was awake enough to talk to his dad and the boys :-) They were still giving him blood though because his blood count was still low.  I think this was when they realized that he had lost more than they originally thought.   It took 2 more nights in the ICU to get his blood count back up.  All in all he was given 12 units of blood. The GI doctor that worked on him told him it was the worst bleed he’d seen and all the nurses kept telling him that he was very lucky. They kept him one more day in MedSurge for observation and then let him go home. I stayed with him every night.

I am truly grateful for his parents who both came to help with the boys. We are extremely thankful for the Doctors and Nurses who saved Ben’s life. Also, Thank You to our Family and Friends who reached out to us by sending us your thoughts, prayers, wishes, txts, messages, calls and emails. I apologize if I did not reply to everyone. This whole situation has really shown me who I can really count on and what is really important. I have been focusing a lot on spending quality time with my family and enjoying Life.  Sorry that this was so long. Thank you to those of you who read the whole thing :-) Life is too Short and too Precious to waste.  Tell those that you care about that you Love them and Make Every Day Count! 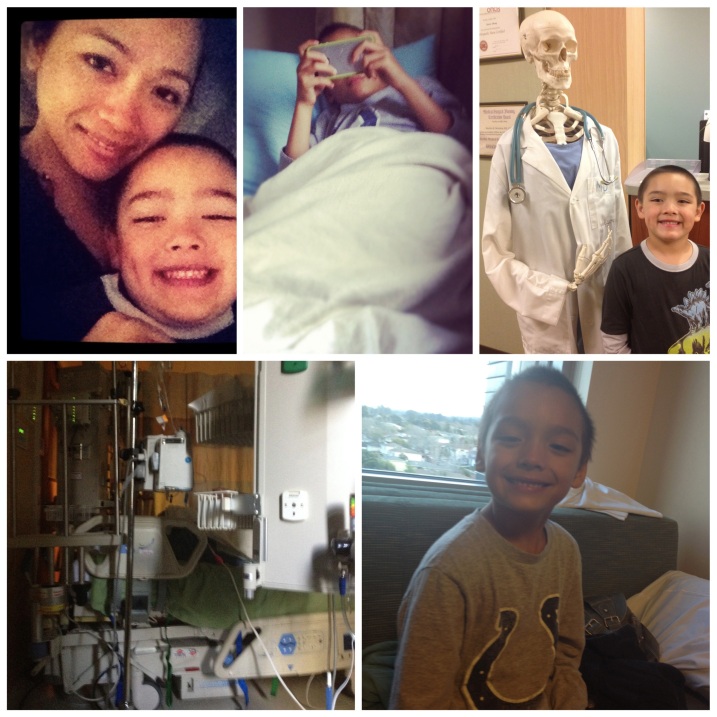 5 days and 4 nights at the hospital (3 days in ICU): Top - Seppe and me in ICU, Gio playing w/ Ben's phone, Seppe with the skeleton doctor. Bottom - Ben's ICU room and Gio in Ben's MedSurge room. 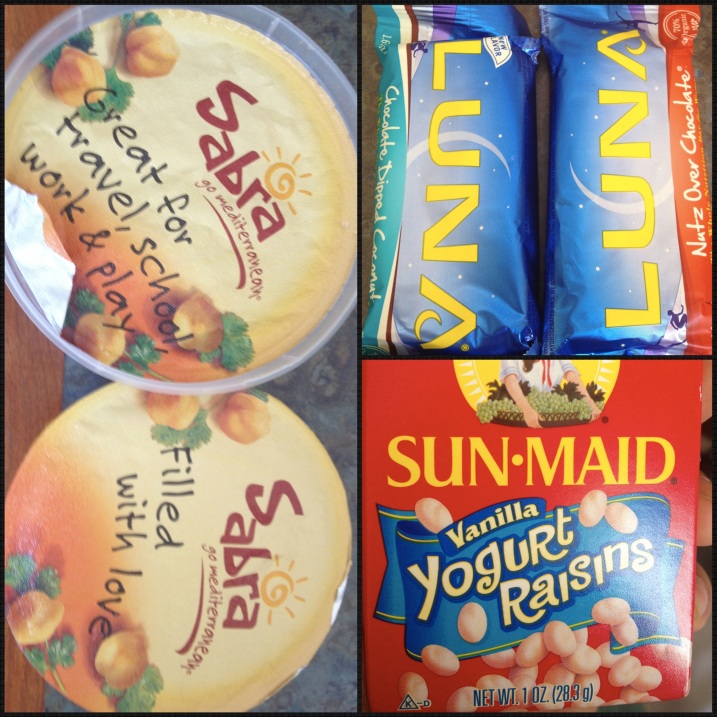 Pretty much what I lived on while I was at the hospital with Ben. Didn't have much of an appetite for the first few days. Brought my water bottle to stay hydrated.