Last night I was nervous about it mostly because I was doing it by myself but when Ben got home from work he said that he would run with me. I was shocked because I didn’t think he was too happy to have to get up early just to support me. I was really happy that he decided to run with me but I was a little worried because he hadn’t trained for it and I didn’t want him to get discouraged. But leave it to Ben to be confident and cocky as ever.  All night and this morning he kept telling me he was going to “smoke me.” Lol. Nothing phases him.

I wanted to get there early so that Ben could register and I wanted to make sure we had enough time to find the place, park, and get set up. I got up at 6a and put on my clothes.  I put on my new ToneItUp top to rep my awesome trainers and toneitup family :-) Made Ben an egg white breakfast sandwich on whole wheat bagel thins. I toasted a whole wheat bagel thin and put almond butter on top.  Added some banana slices and wrapped everything up to eat on the go — I was on a schedule. Got Ben up and while I waited for him to get ready, I packed a lunch box with the bagels, Zico, water, a banana, and couple Luna bars.

The OctobeRun was in RedWood City – only 15 minutes away from us. This was the first year it was held to raise money for the RedWood Schools and sponsored partly by OctoberFest which was happening right after the race. It was a one block walk from the parking lot to the Registration Tents and the Starting Line was not too far away.  I picked up my bib, timing chip and tshirt while Ben registered.  I was going to run with my TIU top the whole time but when I realized I had to pin my bib on, I decided to save my super comfy and cute top.  I wore a tank underneath so all I did was swap my TIU top for the Octoberun tshirt. We had plenty of time after getting our timing chips and bibs on so we walked back to the car to put our sweaters and lunch box away. 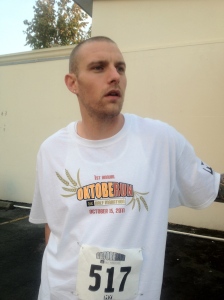 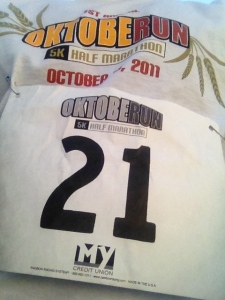 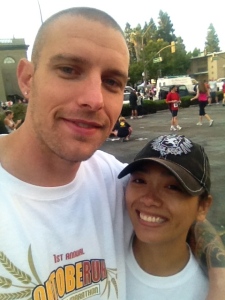 Me and my Benny ready for the Race

Some Stretching and jumping in place to warm up and we watched as the half marathoners start their race.  I really admired those people and one day I hope to be one of them :-)  There were a lot running the half marathon but even more running the 5K.  It was so cool to see people of all ages.  The oldest was an 85 year old woman who wound up taking 2nd in her age group. There were lots of families with kids running too.  I think the youngest runner was 7 – and I think he beat me. lol.

At around 10 minutes before our start time, we headed to the starting line. I worked us towards the front, but not right in front. There were so many people there. I was a little worried I’d get trampled :-/  My heart started to race a little bit when the the timer started counting down. I didn’t know if I was going to stay with Ben the whole time or not.  A part of me wanted to but the other part of me wanted to give it my all. My goal was to finish without stopping and to at least make my best time during training – 27 minutes. 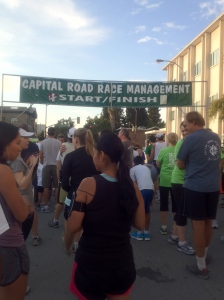 The starter gun went off…. and away we went.  It was tough to get through the crowd at first. Had to maneuver around kids and cones. I don’t know when I separated from Ben.  I thought he was with me for a while because I could hear breathing behind me but when I looked back it wasn’t him.   The route wasn’t too bad. Mostly on streets until the halfway way point where we had to go over a bridge (uphill).  At the bottom of the hill was the turn around point with a water station. I did take some water but probably could have been fine without it. Then it was time to head back up the hill again and go back the way we came.

Crossing the finish line was such a great feeling. It was really neat to hear the announcer call my name as I finished.  They had volunteers right there to take the timing chips off.  I wasn’t paying attention to the timer when I crossed but I think it was 25 min and 20 seconds… give or take a few seconds. lol. I waited for Ben at the finish. He came in around 30 minutes. I was really proud of him because he didn’t stop even though he wanted to.  Not bad for someone who hasn’t run in a Long time. 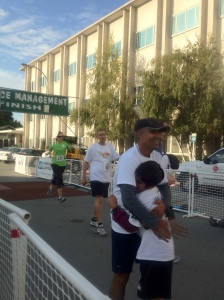 Ben at the finish Line

I had to go to the car and put my TIU top back on and hydrate with my favorite Zico :-) We grabbed a goodie bag and Ben ate some oranges.  They had coffee cake, oranges, and bananas, for us to eat after the run.  We had already split the banana we brought while walking to and from the car.  We walked over to OctoberFest across the street.  The smells from the food trucks were so tempting. Luckily I had a Luna bar with me so I ate that while we walked around to keep me from breaking down and buying the junk food. There were also pastries, kettle corn,  and Italian desserts.  But they also had a farmers market with lots of fresh, local produce. I wish we would have had more time to stick around because I would have loved to stock up on those veggies.  Unfortunately, we had to leave because Ben had to get ready for work. 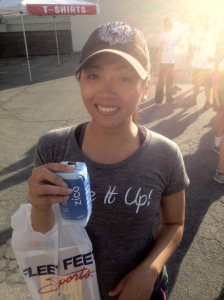 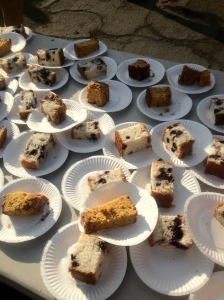 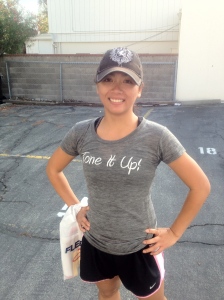 Love my new Tone It Up Top

We stopped to look at the results posted on a van.  I tried to take a picture but didn’t get my time in the frame :-( I came in 69th overall and 4th in my age group.  I am so proud of myself.  I beat my best time by a whole 2 minutes.

*I looked up my time on the results page:

I had a great time.  I am especially happy that Ben was with me.  I even got him to do another one with me next month – but he’ll train for it.  His goal next time is to “smoke me.” lol.

Thank You to Karena, Katrina, and my Tone It Up family. Because of you, I have more confidence than I’ve ever had. I feel amazing and stronger (physically and mentally). I am looking forward to my next race.